The Spheres: A Destination Worthy of the Journey

On Jan. 29, 2018, The Spheres officially opened to the world, instantly becoming one of Seattle’s most recognizable structures. Hundreds of people attended the event, including Amazon’s senior leadership, local politicians, and members of the team that designed and built it. It was a coronation for a project that is widely considered a resounding success.

Just five years earlier, however, The Spheres project was no more than a series of confidential concepts, ideas and sketches. This is the story of how Seattle’s newest icon was conceived, designed and built by a talented team sharing a common goal: to deliver Amazon’s bold vision without compromise while creating something that had never been built before.

The Spheres were built as one phase of the Rufus 2.0 project, which includes several blocks of high-rise and mid-rise office buildings, but the original Rufus 2.0 plans contained no trace of the domed glass structure that occupies the site today. The first phase of the project, the Doppler building, was already well underway in 2012 when architect NBBJ was assigned a new task: to create a truly iconic space and bring an element of nature to the urban office environment.

“As the idea matured, we were really focused on the experiences we were trying to create — not the type of building it was — but we knew it was something that had never really been done before,” Alberda said. “Amazon encouraged us to think big … they showed a lot of courage and vision.”

Though the sheer scope of the finished building was still in flux, nature was at the core of its identity from the very beginning.

“The idea of integrating nature and people together was that we’d have an office that actually made people feel better than when they arrived,” Sadinsky said. “We were trying to create a new kind of workplace — the type where you could truly disengage from your cubicle and think and act in a different way.”

The groundwork had been laid for an ambitious concept — a workplace mixed with a conservatory in the middle of the city, the likes of which had never been built before. Now all the team had to do was figure out how to build it.

“We were trying to create a new kind of workplace — the type where you could  truly disengage from your cubicle.” – David Sadinsky, Sr. Associate, NBBJ

On a conventional project, Sellen’s team relies on recent experience delivering similar work, but The Spheres project was anything but conventional.

“The first step was understanding the vision of Amazon and NBBJ and breaking it down into recognizable subcomponents,” said Tom Boysen, Sellen’s senior project manager on The Spheres, who was charged with leading the team through uncharted territory. “Everyone came in with their own experiences, but we had to let go of all the work we had done before to come up with a new plan.”

A typical project is laid out on orthogonal grid lines, but the shape of The Spheres demanded a circular grid. In fact, because the site was on a slope, many elements of the project weren’t even circles — they instead were ellipses. 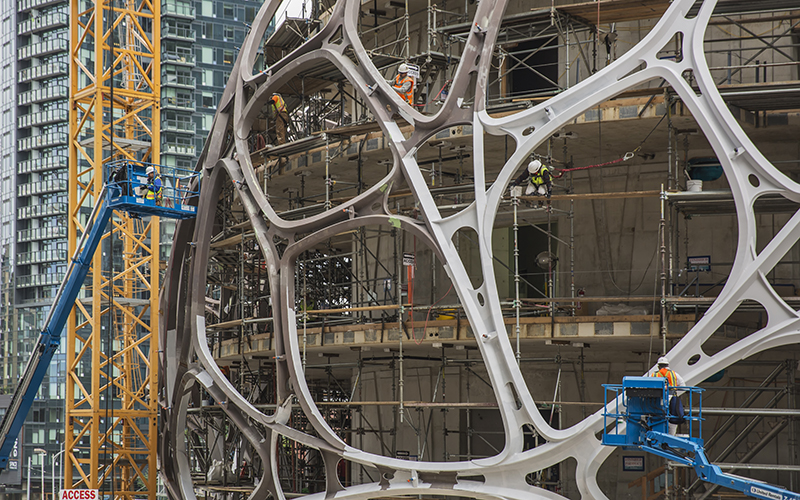 One of these elements was the “ring beam,” a 400,000-pound concrete structure that sits where the building’s rounded exterior meets the ground, built with incredibly dense rebar along a continuously changing radius. The ring beam transfers the structural load of The Spheres to the more typical, rectilinear structure of the garage below. The level of technical precision and craftsmanship required was immense, but the team was up for the challenge.

“I was taught in design school that any time you deviate from a straight line, things are going to become exponentially more complex. It didn’t take long to prove that on this project,” said Elaine Wine, a development manager at Seneca Group, the owner’s representative on the project. “The project commanded everyone’s best work, and the team was passionate and excited to bring their best work to the table.”

In the early stages of the project, structural engineer Magnusson Klemencic Associates (MKA) was brought on board to develop the fully integrated glass and steel exterior structure of The Spheres and create a pattern that was both repeatable and visually striking. With the help of a supercomputer, MKA designed an interlocking structure made of pentagonal steel frames called the “catalans.”

“The gauntlet had been thrown — we were asked to create something that had never been done before that would instantly become one of the most visible buildings in the city,” said Jay Taylor, a principal at MKA. “The first challenge was coming up with a geometry that hadn’t been done before, then we just had to figure out how to build it.” 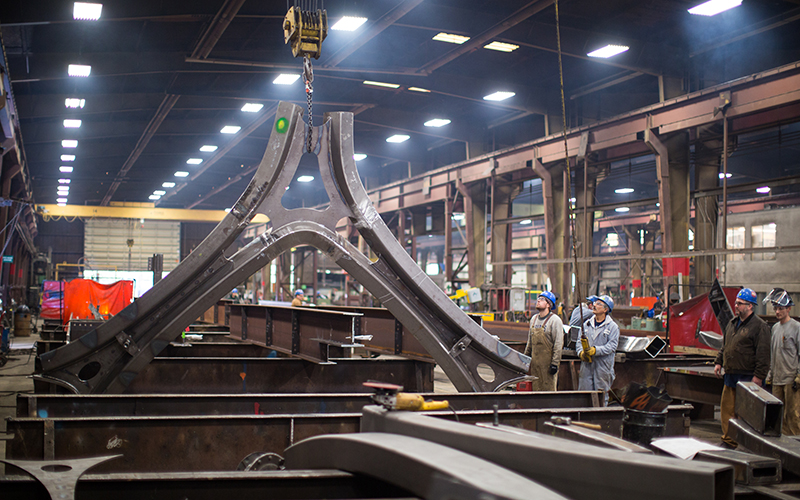 Though it may look like a simple pattern from the outside, each of the 180 steel catalans is unique and composed of more than 100 welds, fabricated off-site by Canron and tailored to the specific structural load carried at each location. In addition, each catalan had four mounting points to receive the glass exterior, requiring a miniscule margin for error previously only reserved for airplanes.

“If we were more than half an inch off target at any point, the façade would not have fit together,” Boysen said.

By the time the steel and glass enclosure was complete, the largest variance was less than 3/8 of an inch, a testament to the astounding precision of the team. The finished exterior’s intriguing design, realized through precise modeling and craftsmanship, also preserves the public’s view of the wonders inside.

“Amazon encouraged us to think big … they showed a lot of courage and vision.” – Dale Alberda, Principal, NBBJ

From the moment the project began, one of the most significant challenges was creating a space where both plants and people could thrive.

“We were given a clear directive: people first. It was up to us to find the right plants that would be comfortable in the same space,” said Ron Gagliardo, lead horticulturist for The Spheres. “We let the interior climate — 75 degrees during the day with 60 percent humidity — guide our plant choices.”

Many of the plants that would inhabit The Spheres were grown at an off-site greenhouse in nearby Woodinville under the watchful eye of Amazon’s horticulture team, including Gagliardo, Justin Schroeder, Mike Fong and Ben Eiben. Some of the larger trees, however, were procured from around the world.

This includes “Rubi,” the 50-foot-tall ficus the team found at Berylwood Tree Farm in Somis, Cali. There was just one problem: as it turns out, transporting a 49-year-old, 30,000-pound tree more than 1,200 miles is no easy task. The team discussed every possible method — cargo freighters, military-grade helicopters, industrial cargo planes and more — before eventually settling on a three-day trucking journey.

The drive north went smoothly, but once Rubi arrived on site there was one final hurdle to clear. Unbeknownst to the crew, part of the box containing the bottom of the tree had rotted, causing it to break as the rigging was positioned.

“This was our ‘Apollo 13’ moment — things had gone very wrong, and we needed to figure out how to solve it,” Boysen said.

The team regrouped, bringing everyone involved to the table and sketching out a number of plans on a whiteboard. Ultimately, they created a steel exoskeleton to protect the integrity of the remaining tree box. Soon after, Rubi was soaring over 7th Avenue and carefully hoisted into place, completing the final stage of her 1,200-mile journey. For those involved, it’s a sight they will never forget.

As the grand opening of The Spheres approached, those who had worked so hard on the project for so long began to realize the time had come to share their one-of-a-kind space with the world. When the interior scaffolding finally came down, the team began to fully grasp the magnitude of their achievement.

“For so much of the project, the entire team was working hard with our heads down, working through solutions and milestones,” said Brad Hayes, Sellen’s director of operations for preconstruction and estimating. “But every once in a while, we had to stop and look around to remind ourselves, despite all the challenges, just how cool it was to work on a project like The Spheres.”

Today, The Spheres are the vibrant embodiment of nature and unique work space envisioned by Amazon and NBBJ from the earliest days of conceptual development. In a building that has become synonymous with Amazon around the world, employees and visitors are treated to incredible sights at every turn, including 40,000 plants from more than 30 countries and a 60-foot-tall living wall featuring 200 plant species.

“I hope it inspires others to think about how we can make the living/working environment feel more connected to nature,” Alberda said. “Before The Spheres, I hadn’t thought about it much, but now I take this element of nature into every project. We’re healthier and more creative when we have these connections to the natural world.” 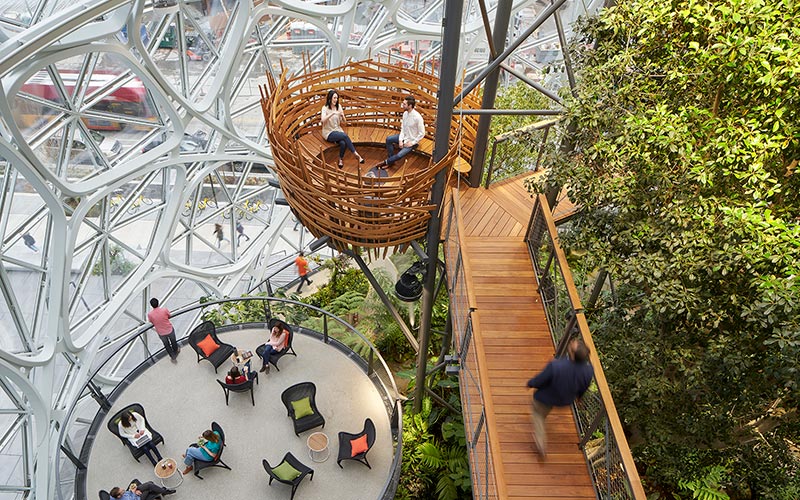 For the group that designed and built the space, it’s more than an iconic addition to Seattle — it’s proof that even the most challenging projects can be built when a diverse team works toward a common goal.

“To each and every person who contributed to The Spheres, I say thank you,” Boysen said. “I hope the team’s takeaway from this project is a belief that you can do anything — there’s nothing the next project can throw at you that cannot be solved.”